4 Herbs To Help With Menopause 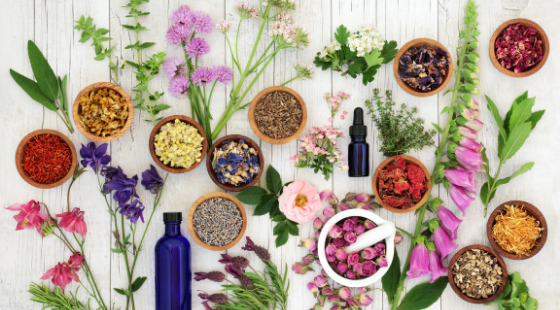 Managing the symptoms of menopause can be a very challenging time for women. During menopause the common symptoms experienced by women include hot flashes, insomnia, night sweats, reduced sexual drive, decreased bone density, weight gain as well as changes to mood. Experiencing these symptoms can be very disruptive to daily life and as a result, women across cultures have long searched for remedies for these intrusive symptoms. This article will focus on plant-based teas and supplements, and what the current research says about their potential to help manage menopause-related symptoms.

Evening primrose oil (EPO) is a common supplement used by menopausal women to address their symptoms. EPO is extracted from the seeds of the evening primrose plant and has been shown to have many health benefits. The reason health professionals believe it is beneficial for women’s health, including the management of menopause symptoms, has to do with its high concentration of healthy fatty acids. To learn more about how healthy fats help regulate menopause symptoms, take a look at our article about Nutrition Strategies To Help Manage Your Menopause Symptoms.

Specifically, EPO has become popular for its treatment of hot flashes. In a 2013 study, 56 menopausal women were provided with two daily EPO supplements for six weeks. The study showed that there was improvement in hot flash severity, and a smaller improvement in frequency, and duration of hot flashes (1). It is hypothesized that EPO produces these effects by lowering blood pressure, however more research is needed to test this hypothesis. The research on EPO however is mixed, as a 2010 literature review concluded that other the counter medication include EPO does not have consistent evidence to support its effectiveness in hot flash management (2).

Most often EPO supplements come in the form of a capsule. Check with a qualified health professional to see if this would be appropriate for you.

Ginseng typically refers to the root of a group of related slow-growing plants. This herb has been used in traditional medicines for centuries for its various health benefits such as strengthening the immune system, regulating blood sugars, and assisting in the management of menopausal symptoms.

In one study, 72 women were supplemented with ginseng daily for 12 weeks. Afterwards, the women had improved scores on the menopausal symptom questionnaires including the Kupperman Index and Menopause Rating Scale (3). These questionnaires focus on vasomotor symptoms, such as hot flashes and flushes, as well as mood symptoms such as nervousness and depression. As a result of daily ginseng supplementation, the women also showed other health benefits such as lower cholesterol levels (3).

Ginseng has been shown to not only be effective in the management of menopause symptoms, but also in managing the functional implications of these symptoms. Menopausal women often report lower libido and poorer sexual experiences. One study evaluated how ginseng supplementation improved sexual function for menopausal women. 31 participants received three ginseng capsules daily. This supplementation significantly improved self-reported scores of sexual function and arousal, indicating that ginseng may be an effective alternative medicine for improving the sexual life of menopausal women (4).

Ginseng can be taken as a supplement in the form of a tablet or can be consumed as a tea, although with teas it is difficult to know if you are receiving a therapeutic dose. Before taking ginseng, you should speak with your family physician or naturopathic doctor to ensure there are no possible interactions with any medications you may be taking, such as medications to lower your blood sugar, or particular classes of antidepressants.

Red clover is an herbaceous flower that historically has been used to help manage varying health conditions including menopausal symptoms, such as hot flashes, night sweats, low bone density, and also has positive effects on high cholesterol. The reason red clover is believed to be effective at managing these symptoms is because it contains phytoestrogens. Phytoestrogens are molecules made in plants, that have a similar chemical composition to estrogen, which declines in women during menopause. To read more about phytoestrogens and why they may be recommended for menopausal women, check out our menopause article.

While the above studies demonstrate positive results, a broad-scope literature review found that red clover appears to “have at best only minimal effect on menopausal symptoms” (7). The apparent mixed results in the literature demonstrates that if you, your loved one, or your client, is wishing to try red clover supplementation for management it’s a good idea to check with your health professional to make sure this is the right fit for you!

One of the most popular supplements for women’s health is black cohosh. Black cohosh is a flowering plant that has been shown to have multiple benefits for women’s health including the management of premenstrual syndrome (PMS), improving the effectiveness of fertility, improving menstrual cycle regulation, and managing menopause symptoms. It can be taken either as a tablet or made into a tea.

Similar to red clover, black cohosh contains phytoestrogens, which are thought to mimic the actions of estrogen in the human body, and therefore mitigate symptoms related to menopause. One study enrolled 80 menopausal women to receive black cohosh supplement for 8 weeks. This trial showed that black cohosh was able to reduce both the severity and frequency of hot flashes (8). Not surprisingly, these study participants reported that when taking the supplement their quality of life increased as well, likely due to their better managed symptoms (8).

In addition to the physical symptoms of menopause, consuming black cohosh also has benefits for the mental health of menopausal women. A recent systematic review recently examined a variety of herbal medicines for their efficacy on managing symptoms of depression and anxiety. With supplementation of black cohosh, the authors noted a reduction in psychological symptoms associated with depression and anxiety in menopausal women (10).

While there are many herbal medicines with evidence to support menopausal symptoms, it is important to always consider potential complicating factors, such as other medications you may be taking. Before consuming any herbal medicines, it is smart to speak with your health care professional, such as a naturopathic doctor about what is best for you. Whether it be through a tablet supplement or an herbal tea, herbal medicines may be a helpful solution for better managing your symptoms related to menopause.