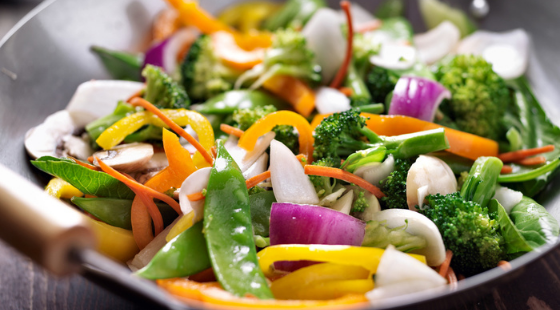 This vibrant dish is a wonderful plant-based meal providing you with the nutrients needed to support your mental health!

Filled with vibrant vegetables and bold flavours, it is the perfect staple recipe!

Edamame is a type of soybean with a nutritional profile built to support your mental health. Edamame has a low glycemic index, meaning that when consumed it does not spike your blood sugars. This is an important quality when it comes to your mood, as fluctuating blood sugar levels have been shown to have negative impacts on one’s mood. Individuals diagnosed with diabetes, who typically have fluctuating blood sugar levels, are at a higher risk of being diagnosed with a mood disorder such as depression or anxiety (1).

Mushrooms are believed to provide a plant-based source of vitamin D. While vitamin D can be produced in the body when our skin is exposed to sun, the limited hours of sun exposure during the winter months make dietary sources of vitamin D important. Low levels of vitamin D is correlated with mood disorders such as anxiety and depression (2). Vitamin D supplementation has been shown to decrease depression and anxiety symptoms (3). While mushrooms provide a good source of dietary vitamin D, protective against poor mood, it is important to ensure that they were grown in sunlight for optimal vitamin D levels (4).

Ginger is used to enhance the flavours of this dish. Ginger’s known benefits include containing high levels of antioxidants to fight oxidative stress and protect against cell damage. Recently, animal models have shown promise that ginger may be effective at reducing anxiety symptoms (5), giving it potential to support mood in humans.