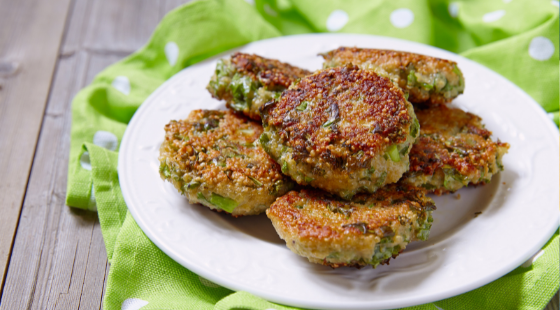 These Quinoa and Kale Fritters are perfect for lunch or dinner. They are delicious served hot off the skillet or frozen and reheated later in the week.

Plus, these fritters have the perfect brain-boosting ingredients, including kale, eggs, and quinoa to keep your thinking skills sharp!

Kale is a part of the cruciferous vegetable family which includes broccoli, spinach, and brussels sprouts. These vegetables are known as a strong support for your liver in the detoxification process, but they also contain nutrients that are important for your brain. Vitamin K is one such nutrient, which plays a role in building important fat cells in the brain. These fat cells allow your neurons to communicate with each other more effectively. (1) When our neurons can communicate effectively, we notice the difference in thinking skills such as memory, and attention!

Eggs are another brain-boosting superfood. Egg yolks are filled with choline, which is used to make the neurotransmitter acetylcholine. This neurotransmitter is known to be important during thinking tasks such as utilizing memory and attention. When choline levels are high, our brain uses it to make acetylcholine which enhances our thinking skills. (2) Studies of individual’s performance on memory tests and choline levels demonstrated that higher choline levels correlated with better cognitive performance. (3)

While quinoa isn’t the first ingredient that comes to mind as a brain-boosting superfood, it definitely has properties to help support brain health. Quinoa has high levels of amino acids, including tryptophan, which are used to build the neurotransmitters our brain uses to communicate. (4) Quinoa is also high in iron. Iron supports the oxygen-carrying molecules in our blood, helping oxygen reach all of the cells in our body, including brain cells, for top performance. (4)

These fritters are very versatile and can be served as a side dish with a dip of your choice. They are also a nice meatless choice to replace a burger. However you choose to serve them, we hope you enjoy! 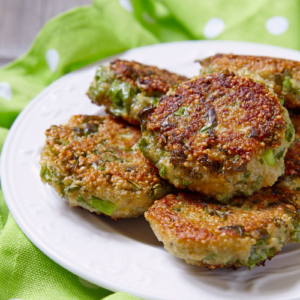