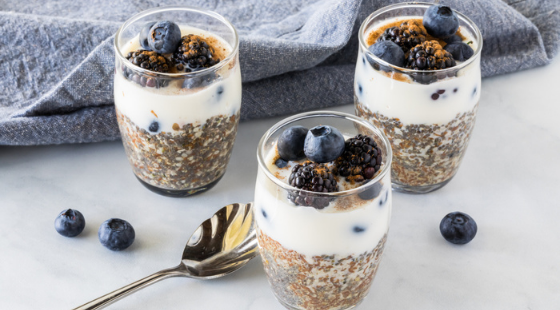 This sweet pudding parfait is likely to put a smile on anyone’s face! It’s a bonus knowing that the ingredients in this parfait align with nutrition to support women’s health, specifically through menopause.

If you’d like to learn more about nutrition for menopause, check out our article Nutrition Strategies To Help Manage Your Menopause Symptoms.

One of the star ingredient in this recipe, flaxseed, is known for its level of phytoestrogens. The term phytoestrogens refer to estrogen-like compounds that are produced naturally by plants, instead of within the human body. These estrogen-like compounds are able to mimic the effect of estrogen, which is helpful for menopausal women who have estrogen levels that are declining. In studies examining menopausal women who consume a high phytoestrogen diet over six weeks, they are shown to have a decrease in hot flashes, night sweats, and flushing (1). It is important to note that there is concern about phytoestrogens disrupting our body’s natural hormone balance, but research supports that it would require significantly high levels of consumption to have a toxic impact (2).

This recipe also avoids the use of refined sugars by substituting maple syrup instead. Avoiding the use of refined sugars is beneficial as consumption typically leads to quick rises and sharp declines in blood sugar levels. This variability often results in challenges with mood, which is definitely the case for menopausal women. Evidence shows that women who had diets higher in refined carbs and sugars had a higher incidence of depression (3). 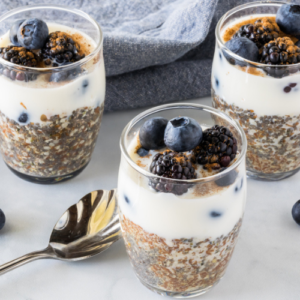