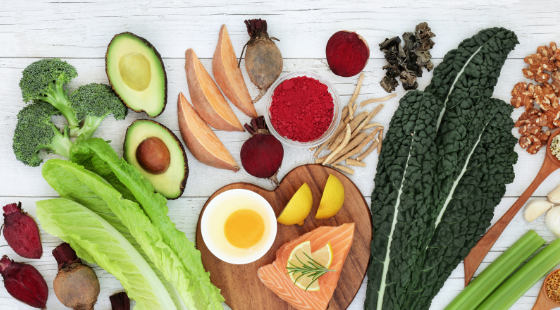 Whether you’ve suffered a brain injury, or are experiencing brain fog, or just struggling to concentrate and focus … we’ve got you covered with this list! Brain foods not only can help with supporting better cognitive functioning, but help can help boost mood, support sleep, and help with better focus and memory for school or work.

This eye-catching, gold-coloured spice is a common component in curries. Turmeric’s most well-known active constituent is curcumin, which has been shown to have many supportive benefits for cognitive functioning. Curcumin is an antioxidant and anti-inflammatory compound that has the ability to cross the blood-brain-barrier, a protective barricade that defends our brain from toxins in our body. Once in the brain, curcumin acts to reduce oxidative stress and neuroinflammation (1). With inflammation reduced, your neurons are able to communicate more effectively, increasing cognitive capacity.

Turmeric is a spice that is an easy addition to many dishes. For an inspiring new take on an old dish, take a look at our Turmeric Hummus recipe.

Eating your daily greens is essential for brain health! Cruciferous vegetables, including kale, spinach, broccoli, and Brussels sprouts are packed full of essential vitamins, such as notable amounts of vitamin K. Vitamin K is a fat-soluble vitamin that is critical for brain health. Vitamin K helps to build strong fat cells in the brain, which improves the structure and communication of our brain cells, otherwise known as neurons (2). Research has shown that individuals who have higher levels of vitamin K, achieved through consuming their leafy greens, have less memory challenges than those with lower levels of vitamin K (3).

If you are looking for a fun way to incorporate more leafy greens in your diet, try these Quinoa Kale Fritters for a new lunch idea!

Eggs are a powerhouse source of choline, a nutrient important for strong cognitive performance. Studies that looked at individual cognitive performance (on tests of memory and attention) and choline levels demonstrated that higher choline levels correlated with better cognitive performance (4). It is suggested that since choline is a major component in the neurotransmitter acetylcholine, high levels help neurons communicate with each other during activities involving memory and attention. While choline is not yet used as a direct treatment in humans, animal studies indicate that choline treatment help reduce memory deficits in animal models of traumatic brain injury (5).

Eggs yolks, specifically, are where high levels of choline are found. For a new way to prepare your morning eggs, check our Pesto-Baked Egg recipe. This recipe also contains kale – another brain superfood!

Fat is a very important component of your brain. Your brain is made up of billions of specialized cells, called neurons, and each neuron is wrapped in a fatty sheath. This fatty sheath helps the neurons send messages to each other quickly. The faster these neurons can communicate, the better our thinking skills including memory and attention. Unfortunately, after a brain injury, this fatty sheath can become damaged and impair communication between neurons (6)

Oily fish, including salmon and trout, are wonderful sources of fat that go straight to the brain. Particularly, omega-3 fatty acids are found in these fish are used to help build up the fatty sheaths around neurons (7). Due to this process, incorporation of oily fish is believed to be beneficial in the cognitive recovery process after a traumatic brain injury.

Pumpkin seeds are filled with the amino acid tyrosine. Consuming this amino acid is important because it is used to create neurotransmitters, the chemicals that our brain communicates with. Specifically, tyrosine is important for creating norepinephrine, which is responsible for responding to acute stress scenarios. When stress is addressed with norepinephrine, it allows our brain to focus on the task at hand without feeling worried or losing focus. Multiple studies have shown that consumption of tyrosine can boost cognitive performance in a stressful situations (8).

Pumpkin and squash seeds are a wonderful source of tyrosine. In fact, estimates show that one handful can have as much as 35% of the recommended daily intake for tyrosine (9). Consider having these seeds as a snack on the go to keep your thinking skills sharp, even on a stressful day! Check out our crunchy yoghurt clusters recipe for a tasty way to consume pumpkin seeds!

Many of us are all too familiar with the daily pick-me-up that appears to come loaded in our daily cup of coffee. However, coffee, specifically caffeine, does more than increase wakefulness; caffeine has benefits for our learning and memory too! When consumed, caffeine interacts with specific receptors in the areas of our brain responsible for learning and memory. After a traumatic brain injury, this interaction becomes particularly important. Researchers suggest that long-term exposure of caffeine can indeed increase the number of these receptors having a positive impact on thinking skills such as memory (10).

Remember, that caffeine can also impact your sleep cycle and potentially exacerbate stress and anxiety, so these are important factors to consider before consumption.

If coffee isn’t for you, then perhaps you’d like to try green tea. Green tea is famous for promoting relaxation and mental clarity and it is increasing in popularity around the world. Similar to coffee, green tea also contains smaller amounts of caffeine, which promotes thinking skills such as learning and memory. However, there’s another important secret ingredient in green tea… groups of polyphenols! Polyphenols are micronutrients that are found in plant foods. Polyphenols are powerful antioxidants that help to fight inflammation in the brain. Due to these anti-inflammatory properties, researchers support the consumption of polyphenols through the diet to facilitate the complex recovery process after a traumatic brain injury (11).

Of course green tea can be sipped as a tea, but you may also be interested in making it into a 2-ingredient ice cream!

Blueberries are small, but mighty, when it comes to protecting your brain! They contain phytochemicals, which are non-nutrient compounds that provide health benefits. Blueberries are high in a particular phytochemical group known has flavonoids. Along with producing that vivid blue colour, flavonoids are strong antioxidants, which protect against free-radicals and neuro-inflammation.

Human studies have shown that consumption of blueberries promotes the growth of neurons, combatting memory loss (12). In animal brain-injury models, when taken as a powered supplement, blueberries have been found to have positive impacts on learning and memory challenges. It is believed that their anti-inflammatory effects, promote brain plasticity, fostering learning (13).

For your daily dose of berries, check out our Berry Beet Smoothie Bowl!

Given that these nuts look like a little brain themselves, it makes sense that they support brain health! Walnuts contain a host of healthy fats, which play an essential role in brain health. Research has shown these healthy fats reduce oxidative stress, maintain the structure of the neuron, and promote the generation of new neurons (14). In addition to these fats, walnuts contain various nutrients including polyphenols, vitamin E, flavonoids, and more. These components allow walnuts to protect the brain against inflammation and mitigate cognitive challenges (13).  Who knew that so much power could be packed inside one little nut!

Who doesn’t love hearing that dark chocolate can be a brain health food! Dark chocolate packs a triple punch containing levels of caffeine, antioxidants, and flavonoids. Just like in blueberries, the flavonoids in dark chocolate are strong antioxidants which fight against oxidative stress and neuroinflammation. This helps to slow cognitive decline and protect against neurocognitive diseases14. One study looked at over 900 participants and found that more regular dark chocolate consumption was associated with a stronger cognitive performance (15).

Remember, we are talking about dark chocolate here and not candy bars or milk chocolate bars, which are full with sugar and artificial colourings and flavourings. Our Pomegranate Pistachio bark is a great way to consume dark chocolate along with flavonoids from the pomegranate arils!

We can see from this list than there are many foods available to support brain function after a traumatic brain injury. Of course, these strategies are relevant to those of us who haven’t suffered an injury as well, as these foods support a healthy brain for improved mood and memory.

It is important to remember that a healthy balance of all these recommended foods, and others, is the most important to optimize cognitive performance. Don’t forget, that many lifestyle factors, such as sleep and stress, impact how our brain functions too! These should be considered in addition to dietary factors to support our brain during recovery or to prevent premature aging.

If you’re looking for help navigating brain injury recovery or other cognitive symptoms, please reach out! Our Nutritionists and Dietitians would be happy to guide you along your health journey!